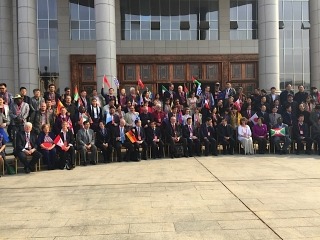 Winnipeg – Members of Living Lakes Canada from Wildsight and the Lake Winnipeg Foundation (LWF) represented Canada at the 14th Living Lakes Conference in Nanchang, China last week. Kat Hartwig of Invermere, B.C. and Alex Salki of Winnipeg, Manitoba, were invited to present their work on sustainable management of lake communities, with a special focus on lake protection. The Canadian presentation focused on the significant water stewardship work being done by NGOs and water stewardship groups in the Columbia Basin and around Lake Winnipeg.

The conference hosted 350 delegates from 33 countries spanning five continents. "We had the opportunity to meet with many Chinese delegates as well as the Premier and Environment Ministers of Jiangxi province," stated Living Lakes Canada Executive Director, Kat Hartwig.

Ms. Hartwig was quite surprised by the enthusiastic response of the Chinese conference delegates regarding the water stewardship work being done in Canada. "We were made to feel very welcome and several directors from the Jiangxi Academy of Science were interested in co-ordinating work on joint projects, such as mapping algae blooms in many of our most important large lakes," stated Hartwig.

Mr. Salki, who is currently chair of LWF’s Science Advisory Council, reflected on the conference. “These types of conferences are very helpful for exchanging information on community-based water stewardship work, as well as to boost the morale of the NGO groups involved in the work.

"It was very interesting to see how universal many of our lake health issues are around the world,” he added.

Leading Chinese academics stated that the decreased health of their watersheds will lead to serious problems such as fragmentation, destruction of vegetation, soil erosion, separation of rivers from lakes, sharp reduction in lake area, water pollution, and loss of biodiversity unless three important actions are taken: water legislation, water governance and restoration.

Kat Hartwig cautioned that the water challenges faced by China are also our own. "China intends to intensify economic growth until 2030, at which time they will have approximately 25% of the world's population and only 6% of the world's freshwater, much of which is already polluted. We are already experiencing carcinogenic toxaphenes from China in the snow of the Wapta Icefields and in the headwaters of the Bow River in the Canadian Rockies."

It has been estimated that the sheer scale of growth and development in China will create Co2 amounts that will be twice the volume than those of all of the OEDC countries combined.

Ms. Hartwig concluded, “This should be impetus for all global citizens and governments to become very actively engaged in water stewardship of their lakes, rivers and wetlands.”