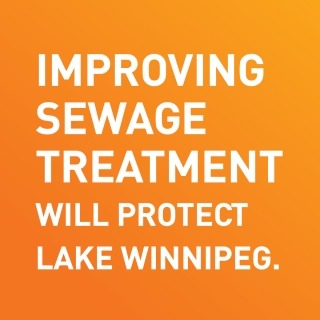 UPDATE: On Dec. 5, The Manitoba government denied the City of Winnipeg’s request for a two-year extension to develop a plan for phosphorus reduction at the North End Water Pollution Control Centre (NEWPCC). Instead, the province is requiring that an interim phosphorus reduction plan be in place by Jan. 31, 2020. It will also assist the city move forward on plans to fully upgrade the NEWPCC. Thank you to everyone who spoke up on this issue! You can read more about this latest development on our Winnipeg sewage update post.

LWF has been advocating for improvements to Winnipeg wastewater treatment and closely monitoring ongoing developments.

Excess phosphorus is the cause of potentially harmful algae blooms on Lake Winnipeg, which have been increasing in size and frequency in recent years.

Winnipeg’s North End Water Pollution Control Centre (NEWPCC) is the single largest point source of phosphorus to the lake. It releases an average of 600 kg of phosphorus every day. This is over three times the 1 mg/L phosphorus limit prescribed in the plant’s provincial operating licence, which was first issued under Manitoba’s Environment Act in 2005. The current NEWPCC licence is set to take effect on Dec. 31, 2019, though city officials have estimated that full plant upgrades will not be complete for at least another 10 years.

In January 2019, recognizing that the current licence deadline would not be met, Manitoba Conservation and Climate asked the city to submit a notice of alteration to its NEWPCC licence. The notice of alteration was to include a revised plan for full compliance with licence conditions, as well as interim measures to reduce phosphorus loading in advance of full plant upgrades.

In July 2019, city officials submitted the notice of alternation to the provincial regulator. They asked for two additional years to develop a licence compliance plan and to test interim phosphorus-removal solutions. No dates for compliance were provided.

In October 2019, Winnipeg City Council directed the Water and Waste department to begin testing interim phosphorus-reduction measures. However, no concrete deadlines are provided to complete this testing, which will be done in a lab. Best-case estimates suggest some phosphorus reduction could be implemented at the NEWPCC by late 2022; this will depend on funding and construction schedules.

The provincial government is currently reviewing the City’s request to determine whether to grant the two-year extension – and whether to attach conditions to any extension granted.

How you can help

Join us in speaking out: Contact Manitoba’s Minister of Conservation and Climate, as well as your MLA. Remind them that, as the provincial regulator, they have a responsibility to ensure the City of Winnipeg addresses the NEWPCC’s impact on Lake Winnipeg.

Here’s an example of an effective letter you can send to the minister and your MLA:

“I am reaching out today on an issue that matters deeply to me: the impact of the North End Water Pollution Control Centre (NEWPCC) on the health of Lake Winnipeg.

I am greatly troubled to know that Winnipeg’s under-treated sewage is the single largest point source of phosphorus to Lake Winnipeg. Excess phosphorus is causing potentially harmful algae blooms on Lake Winnipeg, the 10th largest freshwater lake in the world. I own a cottage on this beautiful lake and have seen firsthand the algae blooms that plague its waters every summer.

I understand Manitoba’s government is currently reviewing a request to extend the NEWPCC’s licence deadline so that city officials can develop a compliance plan for full plant upgrades and review interim phosphorus reduction options.

As regulator, the provincial government has a responsibility to ensure the City of Winnipeg addresses the NEWPCC’s impact on Lake Winnipeg. Recognizing that the NEWPCC licence was first issued over a decade ago in 2005, and that, in 2019, the city has indicated it will be at least another 10 years before full plant upgrades are complete, I urge you to ensure that any licence amendments granted by the province include:

Please reply to let me know where you stand on this issue.

Remember to customize your comment as much as possible, and aim to be clear and concise with your message. A printer-friendly version of this template letter is available here.

Or mail a letter to Minister Guillemard at:

Contact information for all MLAs can be found here.