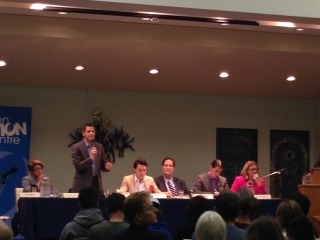 We’re pleased to report some encouraging news for the health of Lake Winnipeg from Sept. 30’s mayoral forum on environmental issues.

One of the three pre-determined questions posed to the six mayoral candidates in attendance (Gord Steeves was absent) concerned wastewater treatment.

Candidates were asked if, as mayor, they would commit to meeting or exceeding the 2019 deadline for upgrades to Winnipeg’s North End wastewater treatment facility, and how they would defend this significant expense in the context of competing funding priorities.

Across the board, all candidates agreed that upgrades to Winnipeg’s wastewater treatment plants are vital to improving the health of Lake Winnipeg and must happen as soon as possible.

David Sanders stressed the need for all council members to understand the seriousness of the problem and act accordingly. Robert-Falcon Oullette pledged to introduce a levy on disposable beverage containers and issue Save Lake Winnipeg bonds to help pay for the costs of the upgrades. Paula Havixbeck promised to beef up the existing civic environmental advisory committee, as well as ban garburators in new housing developments and introduce more composting opportunities to reduce the strain on civic wastewater treatment processes. Judy Wasylycia-Leis and Brian Bowman described improving Winnipeg’s treatment facilities in order to improve the health of Lake Winnipeg as both a moral and legal issue. Michel Fillion suggested rural and urban governments work together.

Several times throughout the evening, Havixbeck and Wasylycia-Leis also brought up Our Winnipeg, a civic development plan created with input from more than 40,000 Winnipeggers and adopted by City Council in 2011. “Protecting local water quality and reducing impacts on the natural environment” is noted as a policy initiative within the Sustainable Water and Waste Directional Strategy of Our Winnipeg.

Meanwhile, a citizen used the audience-question portion of the night to stress the need to preserve wetlands within civic boundaries. Wetlands are ecologically valuable areas that help filter nutrients like phosphorus from the water that flows into our rivers and lakes.

Setting the Standard for Wastewater treatment is Action 3 in LWF’s Lake Winnipeg Health Plan. We know that investment in civic infrastructure needs to encompass more than roads and bridges, and that municipalities across Manitoba must lead by example when it comes to wastewater treatment upgrades if we want other jurisdictions to follow suit. We encourage all local leaders – including the future mayor of Winnipeg, the largest city in the province – to “walk the walk” and get serious about reducing phosphorus inputs from point sources.