Participants and supporters of the Lake Winnipeg Community-Based Monitoring Network (LWCBMN) met at the University of Manitoba in February to learn more about recent LWCBMN activities, how water-quality data are being used and other CBM initiatives.

Coordinated by LWF, LWCBMN mobilizes citizens to collect water samples across Manitoba. With the help of conservation partners and the guidance of LWF science advisors, the network is identifying phosphorus hotspots – localized areas that contribute higher amounts of algae-causing phosphorus to local waterways than other areas.

Highlights from the 2019 gathering

In contrast to 2017, 2018 was a very dry field season. All sampling sites had low discharge, resulting in low phosphorus export, low variation between sub-watersheds and no phosphorus hotspots. The phosphorus export maps below illustrate this difference. 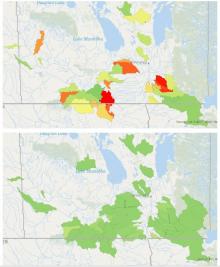 LWCBMN has continued to expand since it first began sampling in 2016; in 2018, a total of 1,000 samples were collected from 101 sites across southern Manitoba, including new sites in the western Red River valley, along Winnipeg River tributaries and within the city of Winnipeg.

Plans for 2019 include a new partnership with the Manitoba Metis Federation and additional conservation districts, further expansion into the Winnipeg River system, and using LWCBMN data to test the efficacy of water-retention efforts and other beneficial management practices in agricultural communities.

Ten regional reports were generated from data collected in 2018.

EICD works with local land owners and other organizations on a variety of soil and water projects – from wetland enhancement and the development of urban prairies to erosion control using willow planting along shorelines to youth engagement and education initiatives. EICD is one of the conservation districts involved with LWCBMN and Armand shared his perspective on how community-based monitoring data can be incorporated into integrated watershed management plans and used by organizations working on the ground.

Elaine provided an overview of Manitoba’s water-quality monitoring programs. The provincial government has been monitoring major rivers and stream across Manitoba since the mid-’70s. Unlike LWCBMN sampling – which is primarily event-based – provincial monitoring is calendar-based, with sampling occurring at identified sites three or four times a year, as well at multiple sites on Lake Winnipeg in partnership with the Lake Winnipeg Research Consortium, which owns and operates the research vessel the Namao. Another difference between LWCBMN and provincial sampling is scope; LWCBMN currently tests only for phosphorus while the province monitors for more than 100 different water-quality variables, phosphorus included.

In 2011, the governments of Manitoba and Canada released the State of Lake Winnipeg report, a comprehensive assessment of Lake Winnipeg’s health. Work is ongoing to produce an updated version of this report. In the interim, the province has released a status report summarizing the most recent nutrient conditions in Lake Winnipeg and nutrient loads from major tributaries flowing into the lake. This report is available here.

In the afternoon, gathering participants were given a sneak peek at Lake Winnipeg DataStream, a soon-to-be-launched online system that provides open access to water data.

DataStream is led nationally by The Gordon Foundation, a 50-year-old philanthropic organization focused on policy issues, and delivered in collaboration with regional partners. The Gordon Foundation’s Water Program Director Carolyn DuBois and DataStream Coordinator Lindsay Day explained the origins of this innovative new approach to sharing water-quality data – now active in the Mackenzie River basin and Atlantic Canada – and highlighted key features such as such as user-friendly visualization tools and an easy upload process.

Those in attendance were then challenged to put their knowledge to the test – and engage in some friendly competition – with an interactive activity that required them navigate their way through the system to find specific data points. The hypothetical scenarios of this ‘data-thon’ showcased Lake Winnipeg DataStream’s multiple real-world uses – and was a fun way to close out the day. Lake Winnipeg DataStream will publicly launch on March 20, 2019.

Pinpointing phosphorus hotspots across Lake Winnipeg’s watershed will help us focus our energy and invest our resources wisely to improve water quality across Manitoba. To learn more about LWCBMN and how you can get involved, click here.