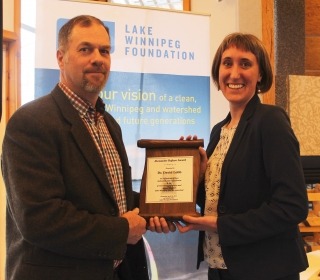 The Lake Winnipeg Foundation is pleased to announce that Dr. David Lobb has been chosen to receive the 2016 Alexander Bajkov Award.

Named in memory of pioneering fisheries biologist Alexander Bajkov (1894 – 1955), this award was created by LWF in 2008 and is presented annually to individuals or groups who demonstrate outstanding efforts to protect and restore the health of Lake Winnipeg and its watershed.

Dr. Lobb has worked in the Lake Winnipeg watershed since joining the Soil Science Department at University of Manitoba in 1998. His research has focused on understanding the processes and evaluating the beneficial management practices that affect nutrient and sediment loading to water bodies such as Lake Winnipeg.

David grew up on a farm in Ontario where he observed his father implementing agricultural conservation practices every day. Since earning his PhD from the University of Guelph almost 10 years ago, he has researched soil redistribution within landscapes, tillage systems, agri-environmental indicators and precision farming. 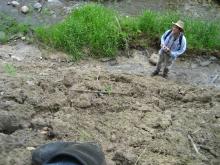 Through his work with the U of M’s Watershed Systems Research Program, he has brought together researchers, government staff, conservation districts, producers and NGOs to carry out research into the causes of eutrophication in Lake Winnipeg, and to find practical solutions that could be adopted in the watershed. His research is often used to inform advancements in on-the-land practices, and he has collaborated with departments in both the federal and provincial governments.

David has made significant contributions in advancing the understanding of watershed processes and nutrient dynamics in cold climates. His current work on integrated water management – i.e., collecting drainage water from agricultural fields and recycling it as irrigation water – has great potential to help reduce nutrient loading and downstream flooding from agricultural fields.

While his academic achievements are numerous and impressive, David’s colleagues speak just as highly of his down-to-earth communication style and the many personal ties he has built within local communities. Indeed, thanks to this relational approach, David has been able to take his science and effectively translate it into solutions that will result in a healthier Lake Winnipeg.

Dr. Lobb was presented with the 2016 Alexander Bajkov Award on April 26 at LWF’s 2017 annual general meeting.

Alexander Bajkov Award nominations are invited annually from members of the Lake Winnipeg Foundation, scientific, academic and arts communities, and the general public.