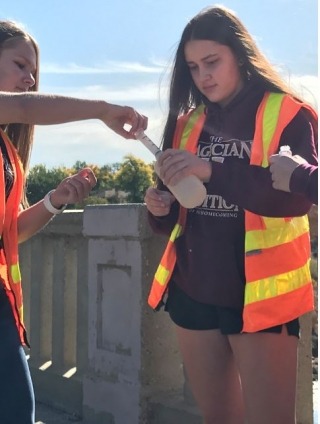 As part of their honours class, a small group of students from Minot’s Central Campus have volunteered to collect samples from the Souris River, using equipment supplied by LWF and following LWCBMN protocols developed by LWF science advisors. Their teacher was trained by LWF staff over Zoom.

LWCBMN is a long-term monitoring program coordinated by LWF which mobilizes citizens to collect water samples across rural areas of Lake Winnipeg’s watershed, primarily within the Red River Valley. Collected samples are then analyzed in a Winnipeg lab to measure phosphorus concentration and calculate the amount of phosphorus exported off the landscape and into local waterways.

Phosphorus is the nutrient that drives the growth of potentially toxic algae blooms in freshwater ecosystems. Data generated by LWCBMN are identifying phosphorus hotspots across the landscape – valuable information that can guide local action to improve the health of Lake Winnipeg.

The Souris River originates in Saskatchewan before looping down into North Dakota, then back up into Manitoba where it connects with the Assiniboine River, which ultimately flows into Lake Winnipeg.

On the Manitoba side of the border, LWCBMN has been partnering with the Souris River Watershed District to collect samples. Over the years since sampling began in 2016, LWCBMN has partnered with Manitoba schools, academic researchers, individuals, conservation organizations, First Nations and industries. Central Campus is the first American school to join the network. Student sampling efforts were recently featured in the Minot Daily News and on KX News.

The cross-border initiative is a pilot project. In the coming months, LWF staff will be exploring how best to ship collected water samples to Canada from the USA without having them compromised during border inspections or other required processes. Once logistical protocols are sorted out, the goal is to establish a long-term sampling site in Minot.

“We’re excited to offer these students the chance to get outside the classroom and actively participate in freshwater science – and we’re also thankful for their help. Their contribution will allow us to grow our dataset and better understand how, when and from where phosphorus is reaching Lake Winnipeg.”