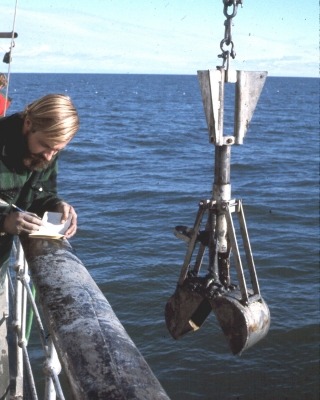 A researcher aboard the Bradbury (now in the Selkirk Marine Museum) collects surface sediment samples from Lake Winnipeg using an instrument called a dredge, circa 1969.

Despite its ecological, cultural and economic importance, Lake Winnipeg is relatively under-studied compared to other bodies of water. Today’s scientists are working to change that.

Research on and around the lake is ongoing, and each new finding furthers our understanding of its unique physical, biological and chemical characteristics. Scientific research also helps us understand how nutrients such as phosphorus are affecting Lake Winnipeg’s ecosystem by contributing to the growth of harmful blue-green algae blooms.

At LWF, we believe good science is key to restoring and protecting the health of Lake Winnipeg. The more up-to-date, accurate scientific information we have about what’s happening in our lake, the better able we are to make smart decisions about water management.

Access to water quality data is crucial for those working on freshwater protection. Lake Winnipeg DataStream provides an online platform to share phosphorus data collected through the Lake Winnipeg Community-Based Monitoring Network with the public and with our partners.

DataStream is an open-access, online hub for securely sharing water-quality data. Led nationally by The Gordon Foundation, it was originally built for the Mackenzie Basin in 2016 and has since become a leading platform used by communities, academics, governments and others. In addition to helpful visualization tools and an easy upload process, DataStream uses state-of-the-art blockchain technology, developed in conjunction with RBC, to provide users with a transparent way of verifying that the data they are accessing are authentic.

The Lake Winnipeg Basin Information Network is an online resource that contains biological and physical data about Lake Winnipeg and its watershed. Created by the federal government through Environment Canada, and maintained by the University of Manitoba with contributions from a number of partner organizations, its goal is to promote data sharing and ensure the consistent and reliable delivery of information.

Reducing Nutrient Loading to Lake Winnipeg and its Watershed: Our Collective Responsibility and Commitment to Action

The Lake Winnipeg Stewardship Board Report was formed as part of a provincial action plan to help protect Lake Winnipeg; its term ended in January 2010. The LWSB’s 2006 report to the minister of water stewardship contains a series of recommendations that, together, act as a blueprint for action on Lake Winnipeg – both for governments and the general public.

The State of Lake Winnipeg report was in released in July 2011 by the governments of Manitoba and Canada, led by Manitoba Water Stewardship and Environment Canada. This report assesses the physical, chemical, and biological characteristics of Lake Winnipeg and presents the recent state of knowledge on the Lake Winnipeg aquatic ecosystem as it pertains to eutrophication.