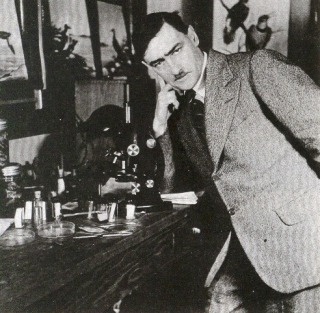 Alexander Bajkov (pronounced “bye-cough”) was born in Moscow, Russia, in 1894. He was educated in the fisheries division of the Moscow Agricultural College, an experience which gave him the opportunity to take part in expeditions to the Caspian Sea, Lake Baikal and other freshwater lakes and rivers throughout Russia.

Bajkov enlisted in the Russian military during the First World War. Fighting against the Bolshevicks in Northern Russia, he was taken prisoner and condemned to death but managed to escape on skis to Finland. He returned to duty and was subsequently wounded in a bayonet encounter.

After the war, Bajkov made his way to Czechoslovakia, where he attended the University of Braunn and obtained a degree in agriculture.

Bajkov immigrated to Canada in 1926. He enrolled at the University of Manitoba, receiving a masters of science degree in 1927 and a PhD in 1931.

During this time he was employed by the Biological Board of Canada, tasked with investigating the biological conditions of freshwater lakes in Jasper National Park. He also studied environmental conditions of lakes throughout the Prairies and native fish species.

Eventually his work brought him to the shores of Lake Winnipeg, where he would make his largest – and arguably, his most significant – contribution to freshwater science as one of the first people to ever study the lake. In the early 1930s, Bajkov established Canada’s first freshwater biological research station in Gimli, working there for three years on the schooner Breeze – a vessel that was eventually lost to the lake’s waters in late 1933 along with its two-person crew.

That same year, Bajkov was transferred to St. Andrews, N.B., where he began working at the Dominion Biological Station. His varied career also saw him conduct research throughout the United States and in Churchill, Man.

Alexander Bajkov died unexpectedly in 1955 at the age of 61 while visiting Naniamo, B.C., where most of his surviving family lives today.

More information about Alexander Bajkov, including a listing of some of his scientific publications, is available on the Manitoba Historical Society’s website, where he is featured as part of the MHS’s “Memorable Manitobans” collection.